Dr. Robert Moser is an associate professor of Portuguese, Brazilian, and Lusophone African Literature and Culture at the University of Georgia. He is also the director of the newly established Portuguese Flagship Program.

His published articles and reviews have appeared in various journals and volumes. Much of his work has focused on the figure of the dead and the expressions of haunting and mourning in Luso-Brazilian literature. Recent research in this area focuses more specifically on the topic of the posthumous and other narrative "dislocations" in Machado de Assis's novels, short stories, poetry, and cronicas. Moser's book The Carnivalesque Defunto: Death and the Dead in Modern Literature was published in 2008. Moser teaches Luso-Brazilian theater and has translated selected plays by Brazilian playwright Augusto Boal (founder of the Theater of the Oppressed), including As Aventuras do Tio Patinhas, which was produced by UGA's Theatre Department in spring 2008.

Dr. Moser's recent teaching and research projects have also focused on immigrant literature in the Lusophone world, both in Brazil and North America. He is the co-editor of the anthology Luso-American Literature: Writings by Portuguese Speaking Authors in North America, published by Rutgers UP (2011).

More of My Students 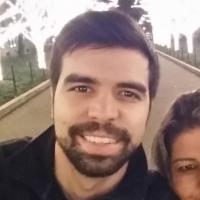